Somebody blooooog me: A smallville live blog.

Malkavian
2011-09-12 23:57:09 edited 2011-09-13 21:58:59 in Liveblogging
MORONS! I'VE GOT MORONS ON MY PAYROLL!
Hello there, IJBMers! Now as you know, I am a professor of Batmanology. What you may not know is that I also minored in Lex Luthoronomy and JJJournalism. So I figured that I should start another blog on the series that is the bane of every Superman-lover: Smallville.

The thing about Smallville is that it's like the Chinese food in the mall food court: It sucks but at least there's a lot of it. With ten seasons of material there's no way you could expect me to watch it all. Instead I'll be watching select episodes and taking suggestions of 'favorite' episodes. For this post, I'll just introduce you to the major characters of Smallville!

This is Clark, played by Tom Welling, and is pretty much the symbol of everything wrong with the show. Welling might be a good actor for all I know, but other than looks he's a pretty poor Superman. Maybe if he got the chance to do Supermanly things in the show I'd think differently but since the show's premise revolves around him not being Superman until the very end all we get are obnoxious nods and winks to he's going to be. The trouble is that what people want out a Superman show is Superman stuff, so we ended up getting all these nods of Supergirl, Green Arrow, etc. all the while pigeonholing the protagonist of the series into a complacent and ineffectual stupor.\ This is Lex Luthor, played by Michael Rosembaum both the best actor in the show and also a person who has hair in real life, resulting in photos that creep me out. I actually am quite fond of a lot of things about this show's Lex, but it ruins it as much as it redeems. While I like the idea that before their parting Lex was a total bro to Clark, the idea that Lex has some sort of 'darkness' inside him is pretty hard to sell, especially since it's almost all the other characters getting posessed/turning evil so Clark and Lex can pal around while figuring things out. In the end, Lex embraces his poorly foreshadowed Supervillain and I'd be lying if I said I didn't want to see him play the character in a show with a script that didn't suck.

This is Lana played by Kristen Kruek, and she's one of the few things that all people who watched Smallville agree on: she is fucking terrible. Okay that's not quite true. She has a dedicated fanbase of idiots that still insist it won't be Lois Clark marries DESPITE HIM DOING JUST THAT IN THE FINALE. In addition to just phoning every episode in, she is the most inconsistently written character in the history of television. One episode she's hyper-competent, the next she's a damsel in distress. Also of note is that she was the star of Street Fighter: The Legend of Chun Li which means she's responsible for working to ruin two things I love. Also of note is that she's one of the two starting main cast that wasn't in the series finale, and the only one people gave a crap about. Evidently this was because she was busy preparing for a ballet performance in L.A. Congratulations, Kruek. You jumped this sinking ship, even if you were the albatross around its neck the whole time.

This is Chloe Sullivan played by Alison Mack and anybody bitching about moe fandom in anime needs to shut the hell up because American TV does the exact same fucking thing. Chloe is, of course, Hollywood-nerd-alternate-pretty which is the kind of pretty that anyone with eyes would simply call drop-dead gorgeous.Oh, but she's nerdy and smart and is part of the school newspaper so that's okay then. When I say smart, I of course mean the Hollywood kind of smart where she's dumb as a brick so the plot can progress but has an obtuse vocabulary and knows lots of obscure facts. She's also notable for having the worst lines in the show, but I always found Mack an endearing enough actress that it kind of worked. Of note is that her character was originally supposed to be Lois Lane but was changed to an original character because they didn't want to give the ending away, which shows the lack of a thought-process the writers have. The entire show revolves around having an ending everyone already knows, but they can't have the girl everyone knows he ends up with anyways in it?

This is Jonathan "Pa" Kent played by Jonathan Schneider who also played Bo Duke on the Dukes of Hazzard. I wish I could make that up: Bo Duke is Superman's dad. He's an alright actor, but in this show oftentimes he feels less like the moral pillar that created Clark as a Superhero and more the judgmental asshole that helped drive Lex to supervillainy. He's a stubborn asshole and whenever Lex and he are in the same room, he treats Lex like a prick just because of who his father is. More disturbing is the fact that we're supposed to pick this up as his fatherly wisdom. That said, he does has some nice moments of being supportive of his son. 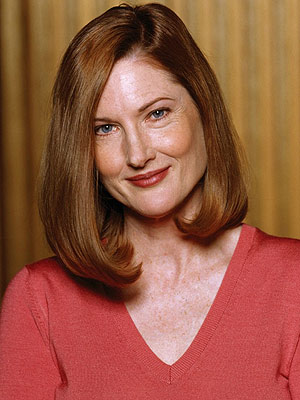 This is Martha Kent played by Anette O'Toole who is a gigantic Superman fan eye are elle. Also notable is that she played Lana Lang in Superman III and if you didn't know that because you never saw that movie I don't blame you. Martha herself tends to be the nice parent to Jon's gruff parent routine and later becomes a part of a conflicted romance with Lionel Luthor, Lex's father. Oftentimes she's mostly there to dispense folksy wisdom and be mom-y. This is Lionel Luthor, played by John Glover, and... and... I'm sorry but that hair is glorious. It's more distracting than Erica Durance's chest. I just wanna curl up in it and make a nest... NO MALK! FOCUS! In any case, Lionel is one of the few reasons to watch this show that aren't attached to a female actress' chest. He really does give the feel of a supervillian who was born a few years too early to embrace his full kitsch. Honestly, if it weren't for the terrible show he was saddled to, I would have expected his ties to Lex to become part of the comic canon.

This is Lois Lane, played by Erica Durance and humina humina humina (slaps self) In any case, in addition to being utterly stunning Durance is a pretty great Lois who is just attached to a terrible script. I honestly would love to see her tackle the character in a Superman film, or another TV show that doesn't suck. It's notable that oftentimes she feels more like a superhero than Clark, going out to investigate criminal activities and even occasionally getting superpowers. Honestly, some of my favorite episodes have her in them and it's usually because they feel like an issue of Superman's Girlfriend Lois Lane.

This is Green Arrow played by Justin Hartley. He was initially a one-episode guest but was so popular they brought him back as a regular. It's easy to see why, because they basically just made him Batman after Nolan put the kibosh on letting them have Batman in this show. Hartley is pretty notable as it really feels like he wants to play the comic book's Greenpeace-meets-James Bond Green Arrow but is tied to this scowling and grimacing persona. Even so, he's one of the better parts of this show (even if his costume makes him look like a douche bag) and many of the best moments are when the show turns into a superhero sitcom and he waltzes in like a good-looking Kramer.

And those are the characters people give a shit about. Like I said, I'm taking suggestions but here are the episodes I'll be liveblogging so far.